Established in 1907, Sunbeam Family Services is Oklahoma’s longest-serving social service agency. Founded as a children’s home for dependent and neglected children, we have evolved to meet the growing needs of the community, today serving vulnerable children, families and seniors throughout central Oklahoma. Sunbeam has been a proud United Way Partner Agency since 1924. 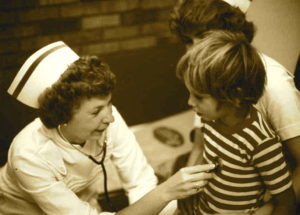 1907 – In 1907, Lizzie Swisher saw a need to for a children’s home in her community. With basket in hand, Lizzie and a group of women went door-to-door in their historic Oklahoma City Heritage Hills and Mesta Park neighborhoods, asking their peers for financial support. That passion to provide safe housing for homeless boys and girls spread, and their efforts raised enough funds to build a children’s home.

World War II — Sunbeam operated a nursery for the children of women who worked in war-connected industries and licensed other providers of similar child care operations.

Late 1940s — Sunbeam again broke new ground when it served as a resource for emergency detention of children under the age of 16 who had committed crimes. Sunbeam’s board of directors provided leadership for the creation of what is today’s Oklahoma County Juvenile Bureau.

Early 1970s
Sunbeam began to provide services to the elderly and their families, now known as the Senior Companion Program.

1974
Sunbeam was one of the first organizations in the nation to run the Caregiver Fundamental Program.

2001
Sunbeam opened a 10-bed emergency shelter for senior citizens that are victims of elder abuse and persons made homeless by catastrophic medical problems.

2002
Sunbeam was selected by the Oklahoma Department of Human Services to become the sole provider of emergency foster care in Oklahoma and Tulsa counties. A Tulsa office was opened but closed in 2004 to better focus Sunbeam’s mission and resources in the Oklahoma City greater metropolitan area.

2003
The Caregiver Fundamentals program was expanded from support for individuals who are caring for an aging family member to include services for grandparents raising grandchildren. Today the program also provides respite care for individuals caring for a loved one with Alzheimer’s.

Sunbeam was awarded a grant to administer the Early Head Start Program in Oklahoma County.

2009
Sunbeam begins operating Oklahoma City’s Educare, a research based program focused on school-readiness for poor children and their families.

2019
In March, Sunbeam received notification of an additional award as a grantee for expansion of Early Head Start services through funding provided by the third round of Early Head Start Expansion and Early Head Start – Child Care Partnership (EHSCCP3).  Sunbeam will deepen its engagement in the highest risk neighborhoods within Oklahoma City and will reach 160 infants and toddlers through a combination approach that includes 88 expansion slots and 72 partnership slots.

2020
Sunbeam opened Pierce Early Education Center, which was repurposed as part of OKCPS’ Pathway to Greatness Plan.  This education center will prepare 96 toddlers and babies from birth to three for school readiness and will be run by Sunbeam staff.   Sunbeam is also working to open the following sites with partners: Millwood Early Education Center and Positive Tomorrows.